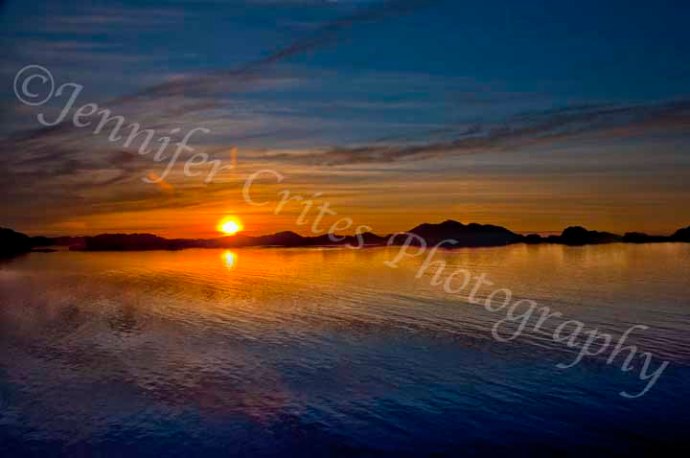 The sun sets over the Lofoten Islands, northern Norway

Just in time for Christmas, this is a link to a story in Budget Travel magazine about the most mythical place on earth. Even though I traveled to Norway this past summer and into the Arctic Circle, I didn’t quite make it all the way to the North Pole. Perhaps next time.

Posted on December 4, 2012 by writecrites

It’s an ironic story line—after raiding and pillaging towns and villages in countries throughout the north Atlantic, Vikings returned home and went to church.

Perhaps they did, but if so, they didn’t attend services in a stave church—so named for its interior, weight-bearing pillars, or staves. There may be dragons on the roof, but stave churches weren’t built until after the Viking Age ended. That date is traditionally marked in England by the failed invasion attempt by Norwegian King Harald III, who was defeated by Saxon King Harold Godwinson in 1066. Ireland and Scotland note their own dates, predicated on victories against Vikings.

At one time there were more than a thousand stave churches throughout Europe. Most were built between circa 1130 and 1350 AD. Construction stopped when the Black Death started to spread through Europe, and congregating in small spaces became life threatening.

And the stave church is indeed a small space. So small, in fact, that most of its congregation had to stand—men and boys on the right, women and girls on the left. The elderly and sick could sit on benches along the walls.

Today only 28 stave churches survive, and all are in Norway where there is a long tradition of building in wood (remember those sturdy Viking ships). Earlier churches were built on often-soggy ground and succumbed to wood rot. Lesson learned. Stone foundations solved that problem. 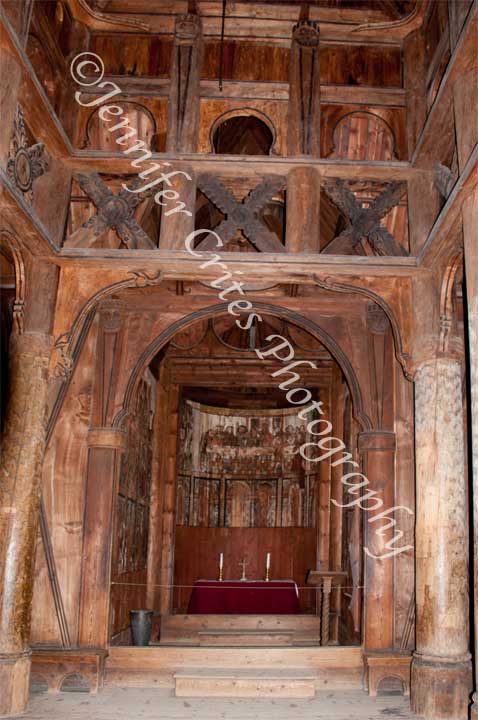 While visiting the stave church in Borgund, I was surprised to see that it—like other stave churches—had no windows. The only light entered through a few small portholes high up on the walls. The altarpiece depicts Christ’s crucifixion. Animal masks adorn the south door, and serpents and dragon-like creatures decorate the main-door side panels and lintel. On the roof turrets, Christian crosses and dragonheads keep each other company. Old legends die hard I guess, and it seems that the parishioners were hedging their bets—honoring old gods and new.

I found it interesting that the timber used in construction of the church was most likely seasoned on the root, strategic cuts drawing the tar to the surface before the tree was felled. After construction and during renovations, additional tar was applied to protect the wood. 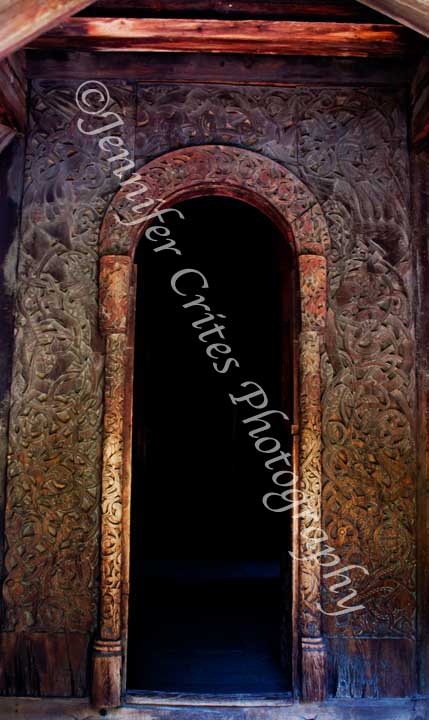 If you stand inside the church and look up, you’ll see that the roof above the nave looks like an inverted boat with ribs. Hmmmmm! I wonder what inspired that design.

We may take it for granted, but, along with vision, hearing, smell and taste, touch is an invaluable sense. So how can a photographer express the sense of touch in a photograph? I hope the following images will evoke the feeling of touch through texture: the softness of a wool sweater, the rough surface of a cement fountain, the knobbly coldness of sculpted metal, fluffy duck feathers, a fish’s slippery scales. And if you should imagine the twinge of a splinter from rough-hewn wood, or the crisp and salt-crusted surface of a French fry, if you know what these objects feel like, the photos have served their purpose by awakening your own memories of texture and touch.

Which ones are your favorites?

Can you spot the ringer? 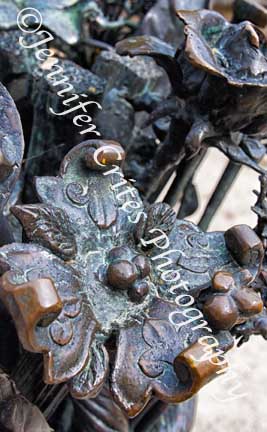 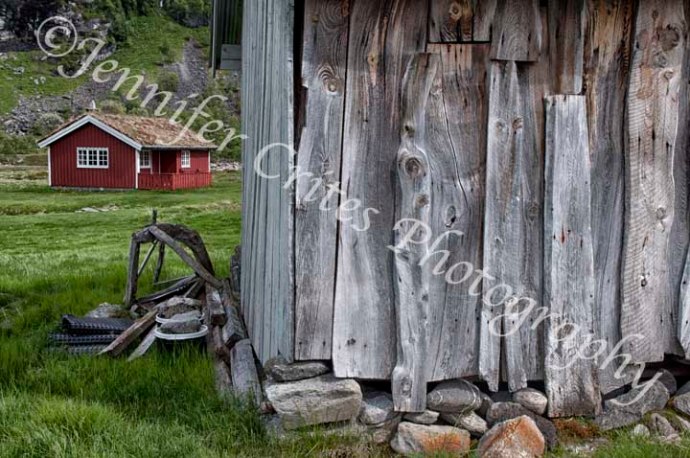 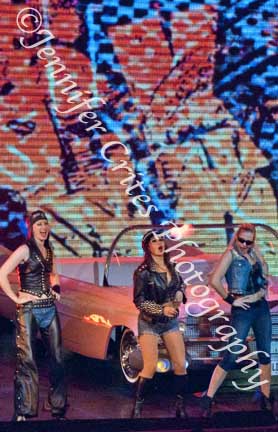 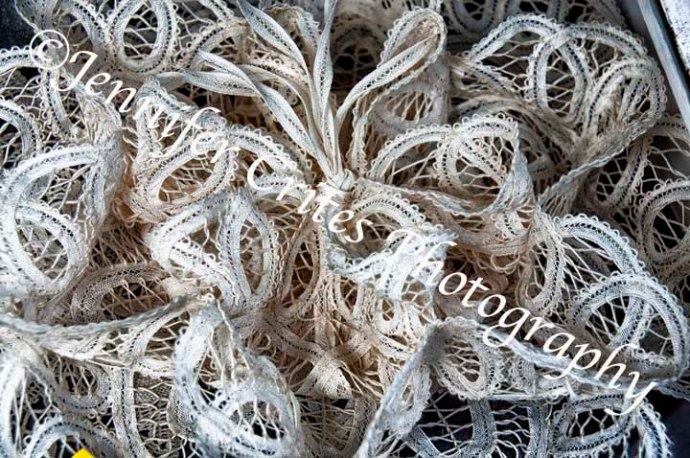 My husband’s shot of the tip of a glacier 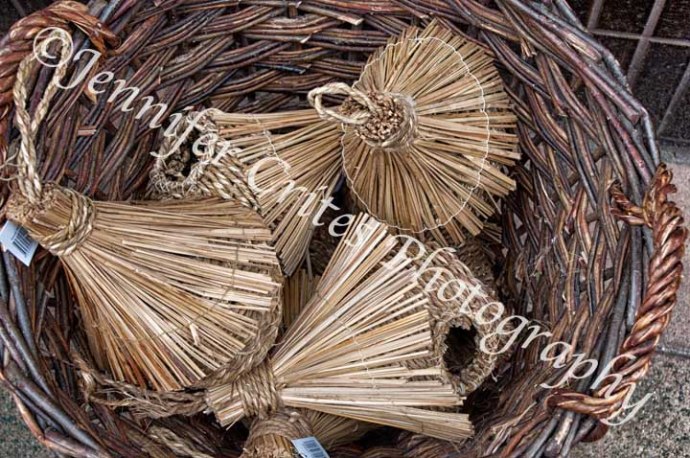 wicker whisks in a basket

Norway belongs to the sea. Along it’s western edge, the forces of water have carved a lacy filigree of bays, inlets and fjords like very few places on earth. It’s the fjords, of course, that capture the imagination. Ice Age glaciers creeping slowly across landmasses, carving out narrow channels that eventually fill with water as the glacier melts and retreats, and seawater encroaches. And they’re deep. Some, such as Sognefjord, plunge more than 4,000 feet below sea level, as deep as the height of mountains bordering them. 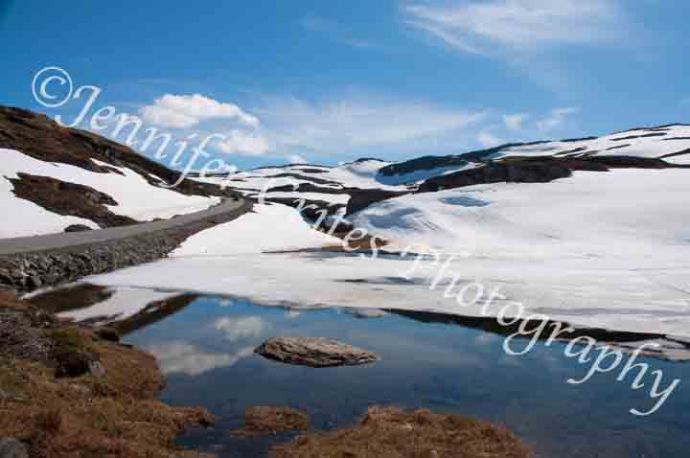 Even in late June, a snowy landscape crowns the top of a mountain above a Norwegian fjord. 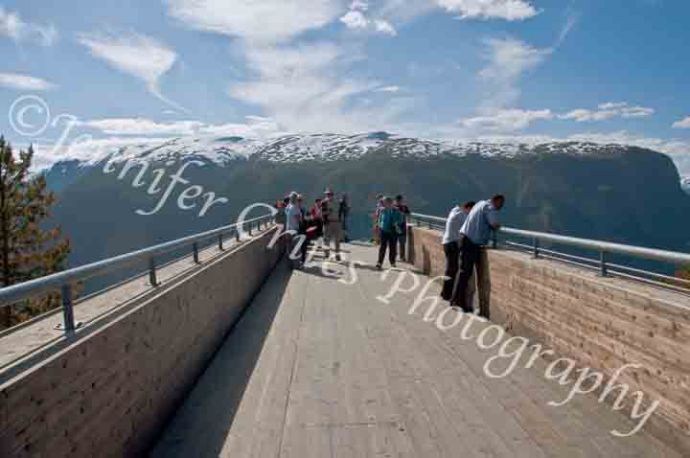 It looks like you could walk off the end of this viewing platform above the fjord. The glass front offers a majestic and spine-tingling view of the fjord below.

Where fjords meet the sea, glacially formed underwater valleys mix with other cross valleys to form a complex array of channels. These run parallel to the coast and are walled off from the sea by a chain of mountainous islands and rocks, making a protected passage along much of the entire 995-mile sea journey from Stavanger to North Cape, Norway. 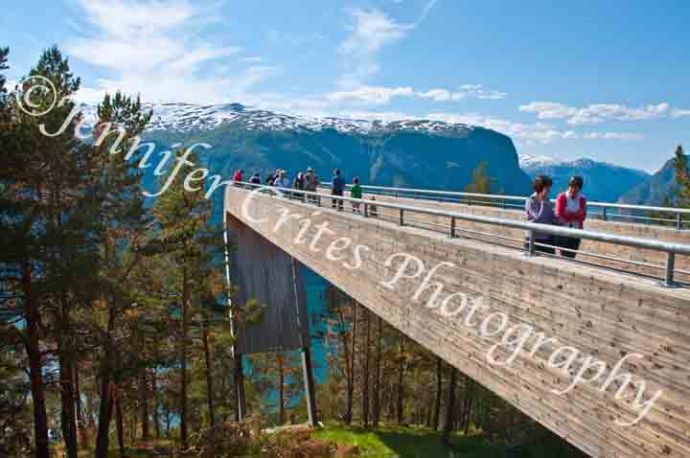 The fjord viewing platform from another angle.

During the winter, towns deep in fjord valleys can be cut off from the outside world. Snow buildups not only clog roads but can unleash avalanches of snow and rock that plunge into the water, sometimes resulting in fjord tidal waves over 100 feet high.

Our cruise ship anchored off the small town of Geiranger (pop. 250), Norway, at the terminus of the Geirangerfjord. During the 4-month summer tourist season, 140-180 cruise ships carrying several hundred-thousand people come here to experience the spectacular scenery. Nine-mile-long Geirangerfjord is a UNESCO World Heritage Site.

But in summer, cruise-ship passengers like us find fjords welcoming and awe inspiring, like peaceful blue-green lakes surrounded by snow-capped mountains and replete with ethereal waterfalls and picturesque towns.

Waiting in the Geirangerfjord until the tenders start up and ferry us to land.

waterskiing in a fjord (disclaimer: shot through the window of a moving bus and between trees as we flew past them).

Attack of the Seagull

I was at least twenty feet away from a fluffy seagull chick, but this mother seagull obviously thought I was in the wrong place at the wrong time. If looks could kill. She dive-bombed me multiple times before finally realizing that I wasn’t posing a threat.

I would have liked to ask her why she chose this spot for a baby outing. The chick was on a small church lawn in the middle of a busy Norwegian town. 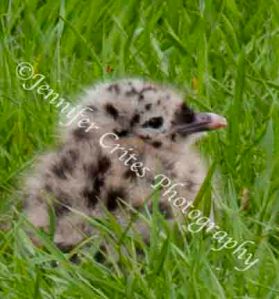 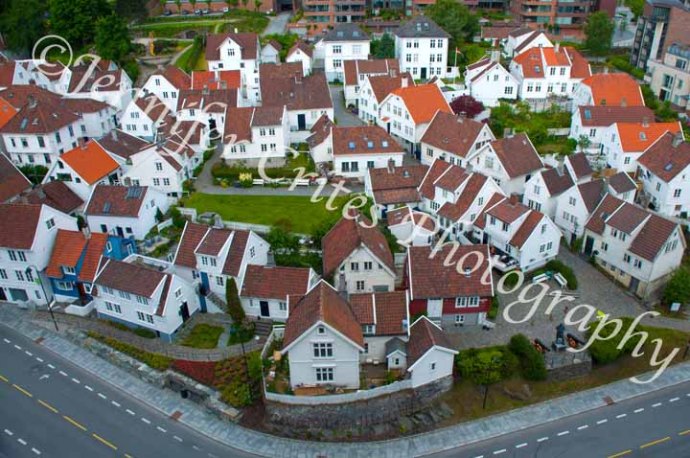 Looking like a collection of doll houses, this perfectly manicured community is the residential part of Gamle (old town) Stavanger, on the southwestern coast of Norway. Lovingly restored and maintained, 173 wooden houses from the 1700s wind along narrow walkways paved with cobblestones. It’s the largest collection of such houses in Western Europe.

Stavanger was originally nothing more than a pretty village with a well-sheltered harbor. It’s growth spurt started in 1125 when an English bishop came to build a cathedral. Like in so many other places during the early Middle Ages, the cathedral made the town, almost overnight. More people meant more commerce, and Stavanger grew into a fishing capital. Once herring stocks became scarce in the 1800s, the town turned to sardines, and a canning factory was built. By 1900, there were more than 50 sardine canneries here. Shipbuilding also filled the town’s coffers, and then, in the 1960s, Stavanger became Norway’s oil capital after oil was discovered in the North Sea.

For this shot, I had a perfect vantage point from an upper deck of our cruise ship.

My sincere apologies to all of you who have been following my blog, waiting for new posts and responses to your comments, and wondering why you’ve not heard a peep out of me in three weeks. As it turns out, I had an opportunity to go on a very last-minute trip—a cruise along the west coast of Norway and a few other spots, but mostly Norway. Internet service on the ship was spotty at best, and there was virtually no time to find and use Internet facilities on shore. I just got back a few hours ago bearing photos, stories and a certificate proclaiming my crossing of the 66th parallel north—into the Arctic Circle, land of the midnight sun. Needless to say, I’m anxious to share and will do so as soon as I’ve sorted myself out and claimed some much-needed sleep.

In the meantime, I hope you’ll enjoy the Aloha Festivals’ pa’u rider (before and after) and a few other photo posts (coming in the next few days) I prepared just before I left, in the hopes I could stay in communication while gone.