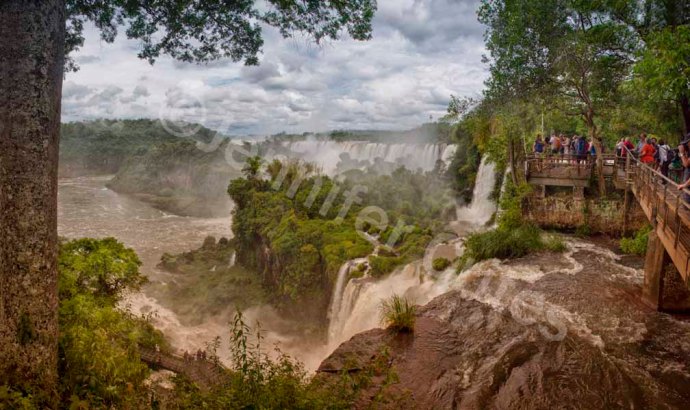 I’ll never forget the jolt of amazement when I rounded a bend on the elevated walkway and saw this view. To capture the breadth and the feeling of power emanating from such close proximity to the rushing water and billowing spray, I took four images, from side to side, and later stitched them together in Photoshop, creating this stunning panorama, which includes the Iguazu River and San Martin island.

Posted on February 4, 2014 by writecrites

It’s early afternoon in Argentina’s Patagonia, and on Peninsula Valdes, the seaside town of Puerto Piramides is throbbing with tourists lining up to pay for their whale-watching tours. The little hamlet has grown up around these tours, with lodging, restaurants, souvenir shops and a tourist information bureau all catering to the trade and brimming with business.

Beyond the last restaurant, on an ultra-wide beach fronting a horseshoe bay, there are no boat ramps. Instead, tractors—like monstrous crabs—chug across the sand, pushing and pulling tour boats into and out of the ocean with the aid of long metal arms. Ignoring the vehicles, groups of sunbathers and daytrippers dot the sandy expanse. There’s plenty of room for everyone.

From the ticket office, we march in line to the beach after donning our bulky orange life jackets. Across the sand we go, up the metal steps to the boat’s deck in search of a good seat. During a lengthy orientation in both Spanish and English (mostly Spanish), a tractor pushes us into the sea, and at the proper depth, we float off the trailer and are on our way to see the whales.

It’s speculated that right whales, both Northern (Pacific and Atlantic) and Southern, got their name because whalers declared them the “right” whales to kill. Preferring shallow coastal waters, they swim slowly, passing close to ports and lingering on the surface. All of which made them easy to harpoon. And once killed, they conveniently floated thanks to their thick blubber layer, which was rendered into oil.

Eventually, they became even more prized for their baleen—a tough yet flexible material that forms a giant sieve in each side of the whale’s mouth, allowing it to strain flea-sized copepods (tiny crustaceans) and krill from the water for food. An adult whale must eat a billion copepods a day to supply the minimum 400,000 calories it needs. Polite society, however, decided that baleen was more useful as corset stays, stiffeners in fashionable gowns, umbrella ribs and horsewhips (hence the phrase, “He whaled on me.”)

Even though no longer harpooned for their blubber and baleen, right whales are still fighting for their lives. All are endangered, but the eastern North Pacific population, numbering less than 50 animals, is critically endangered, while the eastern North Atlantic population may be considered functionally extinct, with only ten or so individuals left. Leading causes of death include collisions with ships and entanglement in fishing gear, but in Patagonia there is a lesser-known problem: seagulls.

Kelp gulls might be responsible for hundreds of southern right whale deaths—especially calves—near Peninsula Valdes. They land on the whales, pecking at them to tear off chunks of skin and blubber for food. The hours of harassment and extensive wounds cause stress and weaken the whales at a time when mothers are fasting and expending energy to feed their young. Since this is a recent discovery, no solutions have been found.

Right whales can weigh up to 90 tons, and an adult female can grow to 49 feet long. The male’s testicles weigh around 1,100 pounds each—the largest of any animal and easily surpassing the larger blue-whale’s 120-pound testes.

On this day, no males are available for corroboration, but before long, we spot a mother and calf. They venture close to our small boat, a mass of black skin and white tubercles or callosities that look like clinging barnacles. The callosities appear white thanks to large colonies of cyamids (whale lice). 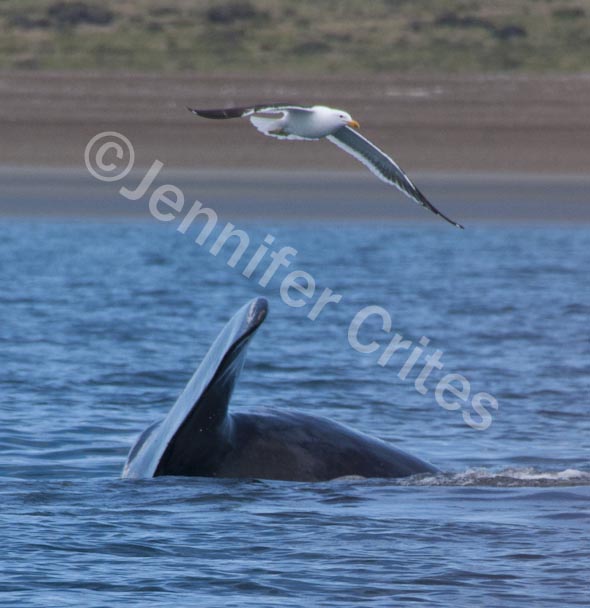 The whales bob up and down on the water’s surface, checking us out, the mother positioning herself between the boat and her calf. Familiar with barnacle-clad humpbacks that spy hop, I strain to see the right-whale’s eye watching us, but it’s nowhere to be found. I learn that it’s halfway down the massive head, near the corner of the mouth—a curved, plunging line that separates a voluminous lower law from a long, thin upper jaw that reminds me of a safe-deposit box lid with a low hinge, or a trap door leading to a storage cellar.

Perhaps because of the odd mouth and lack of a dorsal fin, it seems like the whale is swimming upside down. I’ve heard that these animals can dive to 600 feet, sometimes flipping over and brushing their flat heads along the seafloor, waiting for the currents to sweep food into their cavernous mouths.

On occasion, I can see the mother’s blowhole. It looks oddly like the thick-lipped mouth on the Dairy Queen commercial, opening wide to suck in air or blow out a water spray, then closing tight before a dive.

Other curious mother-calf pairs check us out, too, but finally we head for shore, passing various sea birds and a colony of seals. The crab tractors are waiting for us when we arrive at the beach.

You can check out Jerry’s video here: 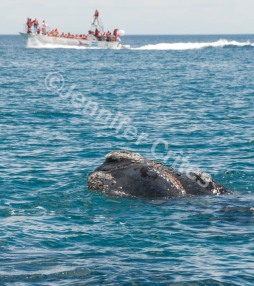 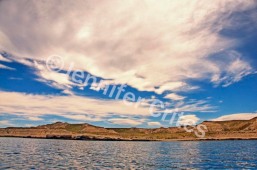 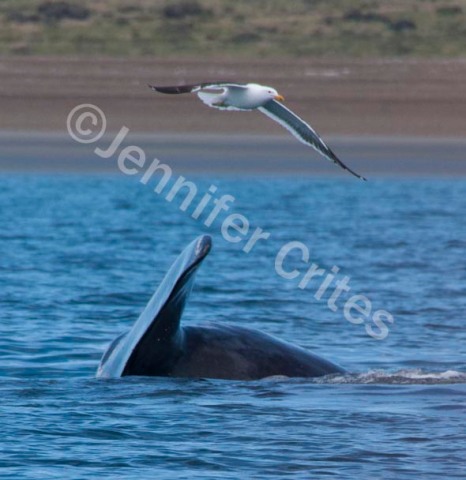 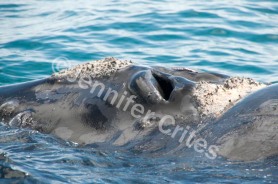 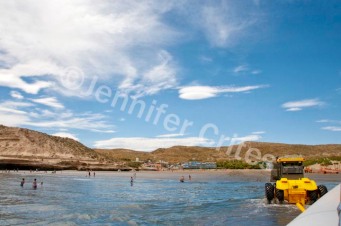